A cautionary tale for your social media team (and entire brand)

Last week, Anthropologie had what can only be described as every brand’s worst nightmare- a delivery snafu that went viral on twitter, first as an amusing story- and then as a customer experience gone terribly wrong, when Anthro’s response devolved from amused and supportive, to unreasonable and threatening- the antithesis of a good customer experience.

Leah Rachel von Essen, posting as @reading_while on twitter, shared her story about the vase that never arrived, and her resulting re-order. Instead of delivering the vase, Anthropologie shipped her 9 huge boxes of unrelated products, including a 20 lb candle, a feather coat, and a strange golden hand. And then demanded she return them all- or risk being banned and billed for the merchandise she hadn’t ordered- and didn’t want.

Had they handled it well, this could have been a great customer experience and a social media win for Anthro. Instead, one mis-directed social media post later, they quickly turned it into a cautionary tale about how NOT to respond to a brand snafu online- quickly going viral on twitter, resulting in thousands of supporters, including a lawyer offering to intervene on Leah’s behalf, and getting picked up by Forbes, as This is The Best Retail Story You’ll Read all week. And indeed, it was.

The moral of the story is: every single interaction with your customers matters. And every single employee of the brand is a brand ambassador with the capacity to help, or hurt the brand’s reputation. Every interaction. Every customer. Make sure that your people know this, and are empowered to do the right thing. In the end- Anthropologie did the right thing. But the damage was done.

It’s worth reading the entire thread. 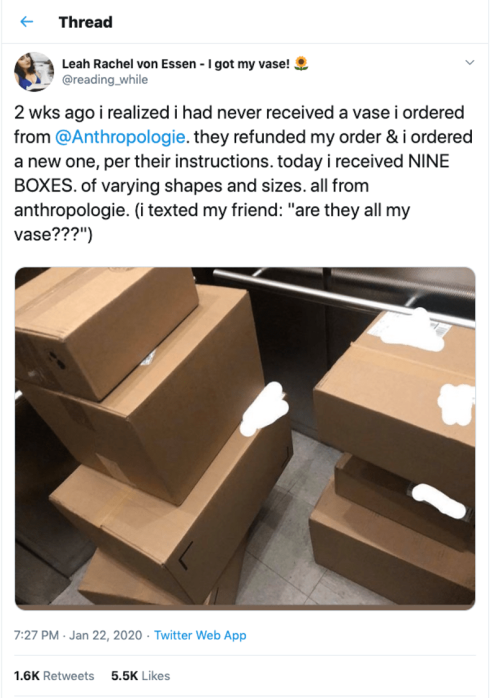 Leah is a book reviewer and blogger, who made this story such epic fun on twitter. You can see more of her writing on While Reading and Walking