Posts from the ‘covid-19’ Category

Above all, stay kind.

As #Coronovirus charges around the globe, so many stories emerge. The give-you-chills kind, where people are helping neighbors and strangers, alike, and the make-you-boil stories, like:

But there are bright spots too- lots of them. Check out #thekindnesschallenge on facebook. At first I thought this was a trite group- people humble-bragging. And it is, a little. But during a frightening times- it’s hopeful and encouraging to see people making an effort to help each other. Here are a few I’ve seen lately on facebook & twitter: 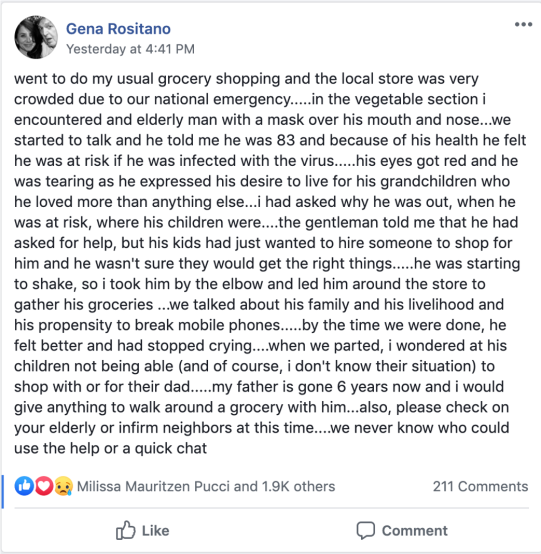 Rebecca Mehra bought groceries for an elderly couple who said they were afraid to go into the store because of the coronavirus.

“Kindness helps,” she says. “…If someone can’t get basic essentials, reach out to them.” https://t.co/AsVw22bxYw pic.twitter.com/wnZRB65klu

This gave me the idea to post on my community group on facebook offering to pick up food, prescriptions or other necessary items for anyone homebound/self isolating- and immediately got dozens of other volunteers to do the same.

These are the things that elevate us, lift our hearts, keep on going. There’s lots of scary, bad news out there. But there are bright spots too. Keep finding them. Be part of them. This is where a little humanity can go a long way.