All this bad press about Mike Jeffries and his reprehensible statements has created a firestorm in social media.  Has he gone too far this time? Well, yeah. He always does. But…

Indeed, his comments are awful. While I could argue that Abercrombie’s aspirational brand vision goes too far (something that’s been hotly debated for years- ever since they launched the magalog with naked teens on the cover), it’s not a new marketing tactic to use shock-value to get media attention. Abercrombie has always pushed the limits, and in fact, revels in going over. But they’re not really doing anything new, now. They’ve always marketed the brand for cool, skinny people. They’ve always had teeny-weeny little sizes that could fit your toddler. So why is everyone so hopping mad about it, now?

Because he crossed the line. He didn’t just cross it, he leapt over it.  He said what no one would say. And defies the ideals of inclusion, acceptance and diversity. In the 2006 Salon feature that’s been so widely publicized this past few weeks, the interviewer asks him how important “sex and sexual attraction are in what he calls the ’emotional experience’ he creates” and Jeffries says:

“In every school there are the cool and popular kids, and then there are the not-so-cool kids,” he says. “Candidly, we go after the cool kids. We go after the attractive all-American kid with a great attitude and a lot of friends. A lot of people don’t belong [in our clothes], and they can’t belong. Are we exclusionary? Absolutely. Those companies that are in trouble are trying to target everybody: young, old, fat, skinny. But then you become totally vanilla. You don’t alienate anybody, but you don’t excite anybody, either.”

(“The man behind Abercrombie & Fitch“, Benoit Denizet-Lewis for Salon, 2006)

Is this exclusionary strategy so different from other high profile fashion brands? Or is he just brutally honest? Let’s focus on the sizing issue. Abercrombie’s sizing is notoriously small. It doesn’t carry extra large sizes for women at all. Even the men’s sizes are downsized: a men’s size XL sweatshirt fits like a women’s size 12.

If you look at the sizing for many upscale fashion retail brands, it’s not really that different. Abercrombie defines a Large as equivalent to a size 10. Many fashion brands define a large as a size 10-12. Some go even smaller, defining it as an 8-10.  And others (the less trendy) define it as a 12-14 or even a 14-16. There’s no standardization for sizing, and we all know it, as frustrating as it is. It always differs by brand. Some are just cut slim- others more generous. We all know the brands we can wear, and the ones we can’t.  So Abercrombie is hardly unique when it comes to size range.

Considering the brand issue, Abercrombie is not unique in having a passionate and specific vision of its aspirational lifestyle and target customer. Countless fashion brands have an aspirational look that celebrates, young, thin, beautiful women, with a target customer that exemplifies the aspirational lifestyle. That’s not news. The key difference? Most brands don’t celebrate the exclusion. What’s hateful about the Jeffrie’s incident is that he didn’t focus on what’s good about his brand- he focused on what’s bad about the people that don’t fit into his brand image.  And that’s bad business.

Jeffries has since posted an apology on facebook that reads:

“I want to address some of my comments that have been circulating from a 2006 interview. While I believe this 7 year old, resurrected quote has been taken out of context, I sincerely regret that my choice of words was interpreted in a manner that has caused offense. A&F is an aspirational brand that, like most specialty apparel brands, targets its marketing at a particular segment of customers. However, we care about the broader communities in which we operate and are strongly committed to diversity and inclusion. We hire good people who share these values. We are completely opposed to any discrimination, bullying, derogatory characterizations or other anti-social behavior based on race, gender, body type or other individual characteristics.” 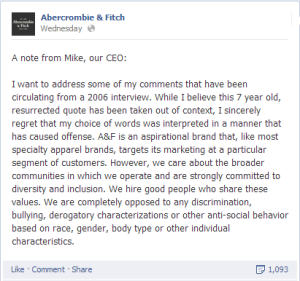 This isn’t the first time Jeffries has hurt the brand he worked so hard to build. He’s been dragged through the mud on many other occasions for discrimation against…well, just about every group except his target audience. So far, Abercrombie has always weathered the storm. But I wonder, will the cool kids really want to keep buying into this? Time will tell.

← What’s your SERP?
Simplicity is key. →